When buying a new camera, most buyers underestimate the quality of memory card, such as speed, capacity and brand. Though quality of memory card is very important due to its function of storing photo and video. There are lot of brands in the market so that we need to understand the SD Association standards set in the form of a code printed on each memory card.

There are two kinds of speed indications, namely Speed Class and UHS. Speed Class determines the minimum writing speed performance when recording the photo files. Speed class that defined by the SD Association namely Class 2, 4, 6 and 10. These numbers indicate the performance of the memory card. For example: Class 2 means the card speed is 2 MB / sec. In this age of digital photography which has megapixel around 12-18MP, the minimum speed of the card should be Class 6. Camera that has megapixel more than 20MP need to use Class 10 card.

Memory card speed will also determine the duration of removing or copying data from the memory card to the hard drive. Maybe it sounded trivial, but for professional photographer such as photojournalist that have to send the picture immediately, read-write speed memory card is very important.

Ideal Memory Card Capacity
Five years ago, 8GB is still enough for a day of hunting, when most of cameras have image resolution not more than 12MP, but nowadays, resolution is getting bigger and bigger. Even a beginer camera has 24MP of image resolution. Therefore, a bigger capacity of memory card is needed.

The tables below indicating the number of photos that can be stored into the memory card with a certain capacity. 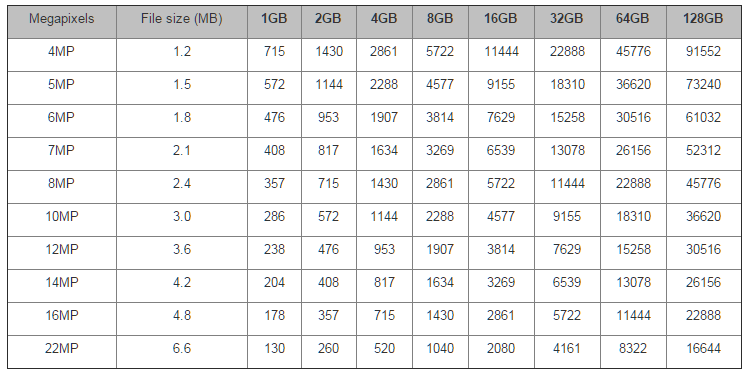 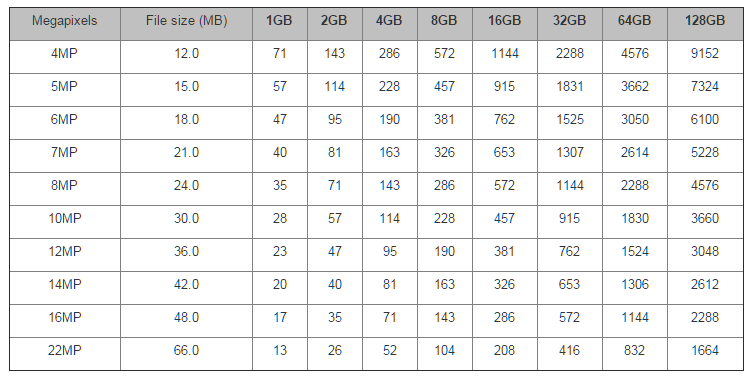 My recommendation for those who are looking for a memory card should suit the spec of the camera. For example, if the resolution is under 20MP, then a 32GB memory card will be enough. If more than 24MP and often recording video, 64-128GB and high-speed (UHS-3) memory card is needed.